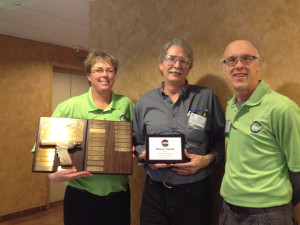 Steve Yarish, recently retired from Agfinity (formerly American Pride Coop) after over three decades, was recognized with the Golden Gun award at the 27th annual Spring Training Conference held on March 3 & 4, 2015 at the Ramada Plaza Hotel. His plaque read, “Stalwart of the Green Industry for over three decades”.   Steve grew up in Denver metro area and went to CSU when during the summers he drove a neighborhood ice cream truck and worked in a denture factory. He worked for Adams County Extension Service for 2 years before joining American Fertilizer/Adams County Coop in April 1979 as a sales rep. It later became known as American Pride in mid 1980’s and in 2012 became Agfinity. He decided to retire in Dec. 2014 and shortly after his wife Kelly of 29 years experienced some serious health issues. They have lived in Brighton for over 20 years and have one son, Nick who is married and lives in